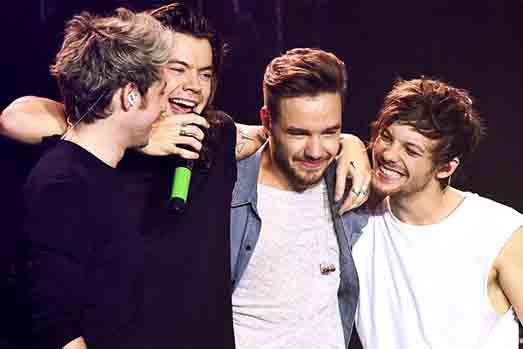 One Direction, often shortened to 1D, is an Anglo-Irish pop boy band formed in London, England in 2010. The band consists of Niall Horan, Liam Payne, Harry Styles and Louis Tomlinson; former member Zayn Malik left the band in March 2015. The band signed to Simon Cowell's Syco Records label after forming and finishing third in the seventh series of the British TV singing competition The X Factor in 2010.
Propelled to worldwide success through social media, the five albums of One Direction, Up All Night (2011), Take Me Home (2012), Midnight Memories (2013), Four (2014) and Made in the A.M. (2015), topped the charts in most major markets and generated hit singles including "What Makes You Beautiful" (their first number one UK single and the best debut for a UK act on the US Billboard Hot 100 since 1998), "Live While We're Young", "Best Song Ever", "Story of My Life" and "Drag Me Down". After the release of Four, One Direction became the first band in the history of the US Billboard 200 to see their first four albums to be number one. Their third album, "Midnight Memories," was the top-selling album in the world in 2013.
Considered the idol of teenagers, One Direction has often been the subject of fan hysteria. They have embarked on four world tours, two of them in stadiums.

In 2020, the band sold a total of 70 million records worldwide, making it one of the best-selling boy bands of all time. The group has won nearly 200 awards, including seven Brit Awards, four MTV Video Music Awards, six Billboard Music Awards, seven American Music Awards (including Artist of the Year in 2014 and 2015) and 28 Teen Choice Awards. In 2013, they earned approximately $75 million, becoming Forbes' second highest paid celebrity under the age of 30. In 2013, the International Federation of the Phonographic Industry (IFPI) named them "Global Artist of the Year". In 2014, Billboard named the group "Artist of the Year". Forbes ranked them as the fourth highest paid celebrity in the world in 2015 and the second highest in 2016.