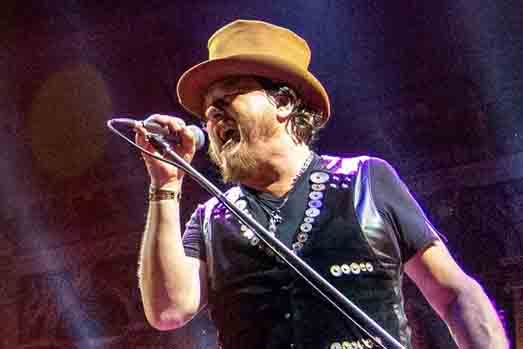 Adelmo Fornaciari, known as Zucchero, born September 25, 1955 in Roncocesi, frazione (attached hamlet) of Reggio Emilia, Emilia-Romagna, is an Italian rock singer. He earned the nickname Zucchero (sugar in French) from his earliest childhood, because his school teacher called him by this affectionate nickname (indeed, Zucchero means someone adorable). He studied to become a veterinarian, but it was a friend who encouraged him to take up music.
He began his musical career in 1970. It was in Tuscany that he first joined small R'n'B bands (Le Nuove Luci, Sugar & Daniels in 1973, Sugar & Candies in 1978 and I Taxi). He recorded his first album in 1976, and then went on to fly on his own in 1983, when he released his first solo album entitled "Un po' di Zucchero". He then met Randy Jackson with whom he founded a new group, Zucchero & the Randy Jackson Band. He emigrates to California. He sings in English and Italian. His music is largely inspired by gospel, and alternates ballads and much more rhythmic pieces, close to boogie. His inspiration is very blues and rhythm & soul. Like B.B. King, his spiritual father in blues, the Italian superstar made his debut in church. This vocal initiation only reinforced her love of black-American music, discovered at university through an American friend.

His real ascent began with the solo album Blue's (1987). It sold more than one and a half million copies in Italy. The album remained at the top of the charts for a year and the Italian joined one of his masters on stage, Joe Cocker. Zucchero revealed himself to the whole of Europe in 1989 with the title Diavolo In Me, inspired by a song by the British singer. Two years later, he continued his success with the mega hit Senza Una Donna. A song that he originally performed alone - it was already on the Blue's album - and which became a big hit in association with Paul Young.

After the album Oro Incenso & Birra in 1989 (which literally means "Gold, Incense and Beer"), which sold 1.8 million copies in Italy (eight platinum records) and 8 million worldwide (platinum records in Switzerland and France), Zucchero released Miserere (1992). This one is seven times platinum in Italy and platinum in Switzerland and Europe. The title song is a duet with Luciano Pavarotti. On this occasion, they both initiate the "Pavarotti & Friends" project, an annual meeting of singers for humanitarian purposes.