Robyn Rihanna Fenty, born February 20, 1988, is a Barbadian singer, songwriter, actress, businesswoman and philanthropist. Born in Saint Michael and raised in Bridgetown, Barbados, Rihanna was discovered by American record producer Evan Rogers. She was invited by Rogers to travel to the United States to record demos that could be sent to record companies and in 2005 she signed with Def Jam. She quickly gained recognition after the release of her first two studio albums, Music of the Sun (2005) and A Girl like Me (2006), both influenced by Caribbean music and which reached the top 10 of the American Billboard 200 chart.
Rihanna's third album, Good Girl Gone Bad (2007), incorporated dance-pop elements, propelled her to international stardom and established her status as a sex symbol in the music industry.
Her best-selling single "Umbrella" earned Rihanna her first Grammy Award for Best Rap/Song Collaboration. Rihanna continued to mix pop, dance and R&B genres on her next four albums, Rated R (2009), Loud (2010), Talk That Talk (2011) and Grammy Award winning Unapologetic (2012). These four albums combine various other musical styles and consolidate Rihanna's commercial success, Unapologetic being her number one debut album in the United States. 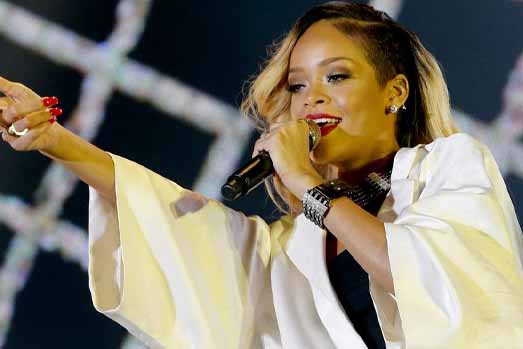 The discs resulted in a series of top singles, including "Rude Boy", "Only Girl (In the World)", "What's My Name", "S&M", "We Found Love", "Diamonds" and "Stay".
His eighth album, "Anti" (2016), brought forward a new creative control following his departure from Def Jam. It became his second number one album in the United States and featured the single "Work", which climbed to the top of the charts. Rihanna has released successful singles in collaboration with artists such as Drake, Eminem and Calvin Harris.
With sales of over 250 million records worldwide, Rihanna is one of the best-selling musical artists of all time. She has 14 #1 and 31 top 10 singles in the U.S. and 30 top 10 singles in the UK. She has received nine Grammy Awards, 13 American Music Awards, 12 Billboard Music Awards and six Guinness World Records. Forbes ranked her among the top ten highest paid celebrities in 2012 and 2014; in 2019, she is the richest musician with an estimated net worth of $600 million. Time magazine named her one of the 100 most influential people in the world in 2012 and 2018.