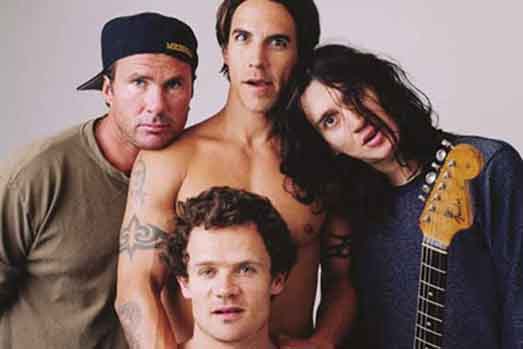 The Red Hot Chili Peppers, sometimes abbreviated RHCP or simply Red Hot or the Chilis, are an American funk rock band from Los Angeles, California. It was formed in 1983 by Anthony Kiedis (vocals) and Michael Balzary (nicknamed "Flea", bass), joined by Hillel Slovak (guitar) and Jack Irons (drums). The Red Hot Chili Peppers adopted a strong artistic identity in their early days that would make the band famous: live performances considered energetic and edgy, instrumental technicality and virtuosity, and deep lyrics about themes such as friendship, love, sexuality and drugs.
The music of the Red Hot Chili Peppers is characterized by the mixture of several musical genres, such as funk rock, alternative rock, funk metal and rap rock. In 1983, the quartet signed their first contract with EMI Records. However, Hillel Slovak and Jack Irons are simultaneously engaged with the group What Is This? and are respectively replaced by Jack Sherman and Cliff Martinez for the release of the first album The Red Hot Chili Peppers in 1984. 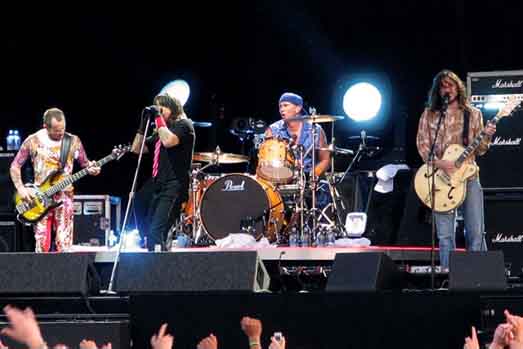 After the dissolution of What Is This? the band reunites with its original members and records Freaky Styley (1985) and The Uplift Mofo Party Plan (1987). In 1988, Hillel Slovak dies of a heroin overdose. Jack Irons makes a depression and leaves the group. John Frusciante, a big fan of the Red Hot Chili Peppers, is hired to replace Slovak, while Chad Smith officiates as the new drummer.
In 1989, the band recorded Mother's Milk, which brought them international fame. In 1991, the quartet changed labels to Warner Bros Records and began a long collaboration with producer Rick Rubin. The band reached fame with the release of the album Blood Sugar Sex Magik and its five singles, including Give It Away, Under the Bridge and Suck My Kiss, which propelled the band on stages around the world. The tour that followed was marked by the departure of John Frusciante, who couldn't stand the sudden notoriety and fell into drug addiction. Dave Navarro takes over for the recording of his only album with the band, One Hot Minute, in 1995.