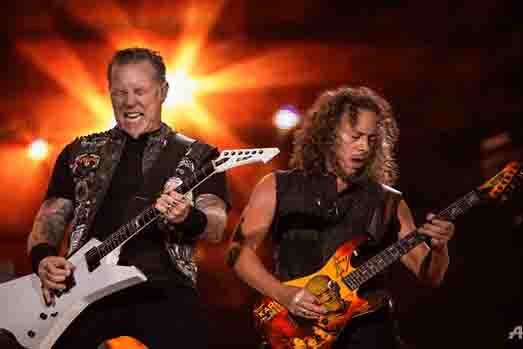 Metallica is an American heavy metal band. The band was formed in 1981 in Los Angeles by singer/guitarist James Hetfield and drummer Lars Ulrich, and has been based in San Francisco for most of its career. The band's fast tempos, instruments, and musical aggression made them one of the founding "big four" of thrash metal, along with Megadeth, Anthrax, and Slayer. Metallica's current lineup includes founding members Hetfield and Ulrich, guitarist Kirk Hammett, and bassist Robert Trujillo. Guitarist Dave Mustaine (who moved to Megadeth after being kicked out of the band) and bassists Ron McGovney, Cliff Burton (who died in a bus crash in Sweden in 1986) and Jason Newsted are former members of the band.
Metallica has gained a growing number of fans in the underground music community and has been critically acclaimed with its first five albums. The band's third album, Master of Puppets (1986), has been described as one of the heaviest and most influential thrash metal albums. Their eponymous fifth album, Metallica (1991), the band's first to take root primarily in heavy metal, appealed to a wider audience, achieving commercial success and considerable sales of more than 16 million copies in the United States to date, making it the best-selling album of the SoundScan era. 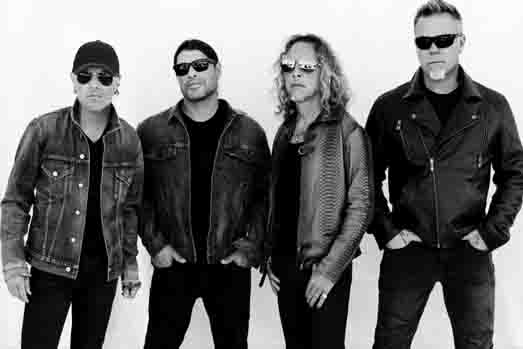 After experimenting with different genres and directions in subsequent releases, the band returned to their thrash metal roots with the release of their ninth album, Death Magnetic (2008), which garnered similar praise to the band's previous albums.
In 2000, Metallica led the lawsuit against the peer-to-peer file-sharing service Napster, in which the band and several other artists sued the service for sharing their copyrighted material without their consent; after reaching an agreement, Napster became a paid service in 2003. Metallica was the subject of the acclaimed 2004 documentary film Metallica: Some Kind of Monster, which documents the troubled production of the band's eighth album, St. Anger (2003), and the internal struggles within the band at the time. In 2009, Metallica was inducted into the Rock and Roll Hall of Fame. The band wrote the screenplay and starred in the 2013 IMAX concert film Metallica in 2013: Through the Never, in which the band performed live as part of a fictional thriller.