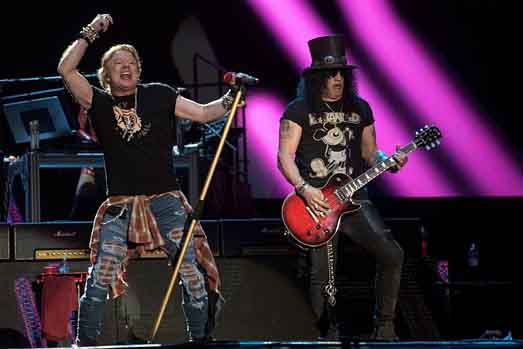 The album Appetite for Destruction (1987) sold more than 30 million copies and remains one of the best-selling albums in history. From this album, the song Sweet Child O' Mine reached #1 on the Billboard Hot 100, and in 1991, the band released two albums simultaneously, Use Your Illusion I and II. That same year, the group began a marathon tour that would last more than two years. In 1996, following the departure of all the original members with the exception of Axl Rose, the group saw a large number of musicians in its ranks. In 2008, Chinese Democracy was released, which required nearly 15 years of preparation and a budget of about $13 million.

The band is ranked 92nd on the Rolling Stone list of greatest artists of all time and is inducted into the Rock and Roll Hall of Fame on April 14, 2012, a ceremony in which Axl Rose does not participate. In 2016, guitarist Slash and bassist Duff McKagan return to the band, twenty years after their departure, for the Not in This Lifetime tour . Tour which becomes the third most revenue-generating tour in the history of music.

The band is formed in 1985 from the fusion of three members of the band L.A. Guns (solo guitarist Tracii Guns, bassist Ole Beich and drummer Rob Gardner), with two members of Hollywood Rose (singer Axl Rose and rhythm guitarist Izzy Stradlin), hence the name Guns N' Roses. A few days after the formation of the band, Ole Beich is fired and replaced by Duff McKagan. Having failed to show up for rehearsal, Tracii Guns is then replaced by Slash. After a tour in California, drummer Rob Gardner leaves the band and is replaced by Steven Adler, a close friend of Slash6. This formation becomes definitive from 1985 and will be signed by Geffen Records in 1986.